Lowering the Cost of Public Lighting

The Local Authority choice: Lights off or change to LED?

Most local authorities, municipalities or councils today believe that they have to choose one of two options for lowering the total cost of providing public lighting on highways, car parks and footpaths; namely, either turn lights off at night when there are not many people out and about or replace all their lanterns with an LED version. Let's look at each option in turn and assess the total impact of that particular decision and whether there is a very cost effective 3rd option?

Turning lights off at night, more often called part-night lighting, will almost always require a visit to every post to replace the existing photocell with a part-night lighting version. Not only does this new photocell cost more than the original, it still only enables one vector of cost saving - that of reducing the time that a lamp is on. However, although that may reduce the burn hours for that lamp post, it does not necessarily make the savings you would expect. There are consequences of turning lights off from say between midnight and 5am.

The life of a High-Intensity Discharge (HID) lamp is almost directly proportional to the number of times it is ignited. Every time a lamp is turned on, the lamp deteriorates by a small amount. As the cost of maintaining street lights is mostly down to the cost of sending engineers to a post for repair, the regular re-lamping of posts is a major cost factor. A SON (HPS) lamp would usually need to be replaced every 3-4 years in normal use but with part-night lighting policy, the time between lamp replacement can be significantly reduced and actually increase costs - potentially negating the energy cost saving altogether.

Another hidden cost is down to the tariff a local authority may be on for its electricity consumption. Street lights are one of the few remaining assets in the UK that are still billed as Unmetered Supply. This is effectively an estimate for how much power has been consumed based on the testing of a sample lantern and using the historically measured value of kW/hr and multiplying that by the quantity of that particular lantern/ballast/lamp combination. This is the topic for a post all on its own so we can go into more detail then but suffice to say that the total number of kWHrs consumed by an authority's public lighting stock determines the tariff or price per kW that they pay. Ironically, by adopting part-night lighting, they reduce their total electricity consumption and it has been known to trigger an increase in the tariff as they no longer get the volume pricing they have been used to. They do still get a reduction in CO2 and the associated carbon tax but their energy bill is not proportionally lower to the reduced number of burn hours.

So if part-night lighting is not the panacea for cost reduction it may have seemed on the surface, let's look at making the light source itself, much more efficient. For most people, that means switching to LED. Traditional ballasts for HID lights are wire-wound transformers that can be only 60-70% efficient so it is not unusual for a 150W SON lamp to draw over 190 W from the mains supply - called its circuit Watts. More efficient electronic ballasts do exist but as their relative benefit over wire-wound versions is marginal, it is not a good retrofit option. Most electronic ballasts have been historically deployed as part of an entirely new lighting scheme. So, to get 50% or greater energy savings one must have to rip out the often beloved HID lanterns and replace them with LED? Well, that is certainly the rhetoric coming from the lighting industry and why wouldn't they? They have an opportunity to replace pretty much every lantern currently deployed.

3rd Option: Why not keep your existing lanterns AND cut costs by over 50% ?

It is not, however, the only option. How about cutting energy consumption by 50% AND making a standard HID lamp (SON or Metal Halide) last 8-10 years - cutting maintenance costs in half as well? For those lighting estates that have a good proportion of recently deployed HID lanterns, it seems very wasteful to rip them out and discard them in a skip. What about those residential areas that don't really want bright white LED lighting or those areas of a city whose character at night is partly defined by the monochromatic golden accents made by sodium lighting? Well, enLight's lighting platform can bring these sort of savings to existing HID infrastructure and the radio network that is used to manage the lights brings all sorts of Smart City/Town/Village benefits as well - but that is the subject of another post.

Feel free to comment below or learn more in our Smart City Brochure by clicking the image below: 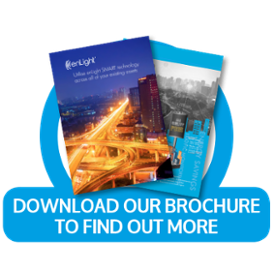